Sheryl Sandberg recently wrote a book called “Lean In” based on her TEDTalk in 2011 where she pondered why there are so few women at the top. Initially scanning through the pages, I became confused, apparently like so many other women readers before me, I wanted to know why “Lean In” was less story about her compelling leadership and more like a Gender Studies 101 class in a liberal arts college. Now I love a good study, don’t get me wrong, the Pew Center for Internet Research is a daily read for me; however, how am I supposed to Lean In Sheryl? And more importantly how am I supposed to get others to Lean In?

Do you want to know why it was less Lean In and more granola bar side of Birkenstocks? Because it was basically WRITTEN by a village, a gender studies village. Head back to the “Let’s Keep Talking,” “Acknowledgments,” and “Notes” pages because that is where stuff got done. As indicated already by a writer for USA Today, it’s more like a book branded by Sheryl Sandberg, than authored by her (I have no proof to this assertion except where she basically says-I didn’t have time to write this, thank you Harvard). This is not even the crux of my argument because you know what? She don’t have TIME to write her own damn book! She is too busy getting shit done. Women are too busy changing lives, communities, corporations, nonprofits, PTO’s, sewing dance outfits, having babies, breastfeeding kids, working during the day [and all night], managing juice boxes for Little Leagues and orange slices for soccer practice to actually mentor or teach other women who are also holding on by the tattered threads of their business suits and hobbling through the streets on their commute in shoes too high to mention [no they aren’t comfortable] because we need to LOOK good as well as BE good.

It’s also because in the rare event that one of us does actually write a book to inspire our sisters in business or leadership, we attach a high heel on it and coin it something “cute” like “Stilettos in the Boardroom,” write about our successes in Stiletto Mafias, or it’s practically bleeding the color pink like my golf clubs [WHY?!], or my coffee mug with a tiara on it, or my lipstick in breast cancer awareness pink. I still can’t figure out why Stilettos are coming to the boardroom, why not my ideas and my smile instead?

Now I don’t want to be the only one to put a damper on the pink parade of vagina love here, but you can see the irony of asking people to Lean In here right? Perhaps it’s to smell our perfume or to give us a hug or pat on the ass Mad Men style? The messaging is conflicting and so too are our roles in society.

When was the last time you saw a leadership book marketed to men that asked them to “choose” between stay-at-home dad and boardroom, or that gave a list of ways in which to multitask in order to “get it all in” during the course of a day? What are we doing to ourselves sisters? Even the description of a women’s leadership book called “Ask for It” explains why it’s essential to ask (men do it all the time) and teaches you how to ask effectively, in ways that feel comfortable to you as a woman [there are different ways to feel comfortable as my own gender? This advice seems a little too late here lady]. The description reads:

“Whether you currently avoid negotiating like the plague or consider yourself hard-charging and fearless, Babcock and Laschever’s compelling stories of real women will help you recognize how much more you deserve—whether it’s a raise, that overdue promotion, an exciting new assignment, or even extra help around the house. Their four-phase program, backed by years of research, will show you how to identify what you’re really worth, maximize your bargaining power, develop the best strategy for your situation, and manage the reactions and emotions that may arise—on both sides. Guided step-by-step, you’ll learn how to draw on the special strengths you bring to the negotiating table to reach agreements that benefit everyone involved.”

AROUND THE HOUSE?! Thank goodness. I mean, what would I do if I couldn’t get help around THE HOUSE [*sarcasm*].

I wrote for The Mode Life about Tina Fey talking about why so many Americans didn’t like Hillary Clinton in the previous Presidential election, and suggested that it was because she is a Bitch. I think everyone assumes that the majority of older, conservative, white males don’t support strong women; few expect that women wouldn’t support each other. As if dealing with the proverbial Old Boy’s Club in the business world isn’t bad enough, we have to deal with other women who are jealous and threatened.

Where is the sisterhood? Where is the desire to create a society that isn’t male dominated for the future female leaders? Why the jealousy and undermining behavior? A glass ceiling is bad enough don’t make the hallway under the glass ceiling feel like we’re back in junior high with its mean girls, judgment, comparisons, angst, and hormones. Can we get just one break not simply a crack?

A while back my girlfriend came to me and mentioned that a recent incident at work has left her analyzing the approach she takes in working with others and by others I mean, another woman in her corporate palace. My friend, despite saving millions of dollars for her company, was removed from an area that is making progress for the first time in years based off of comments made by another woman about how “difficult” my friend is to work with.

To quote Tina Fey in that famous Saturday Night Live skit, “Know what? Bitches get stuff done.” My friend get LOTS of stuff done, but apparently being a mild, uneducated “yes woman” would get her further, or make her “well-liked” instead of productive or valuable to the corporate culture. Perhaps we should strive for THAT scenario! Absurd. Advice from her mentor, a Vice President and 30-year business veteran, was not only discouraging, but downright depressing. “You may just have to play nice” she said.

WHAT?!? Why should she have to play nice with them? It’s not like that she is “mean.” Perhaps she lacks patience for people who occupy space without contributing much to it? Why are they still around? And why can’t they just be happy for the success of other women? Why is success limited? Why is it her problem? Not the answer to a problem. Even this Time cover begs us not to hate Sheryl because she is successful and I didn’t even think of hating her until I read this cover! 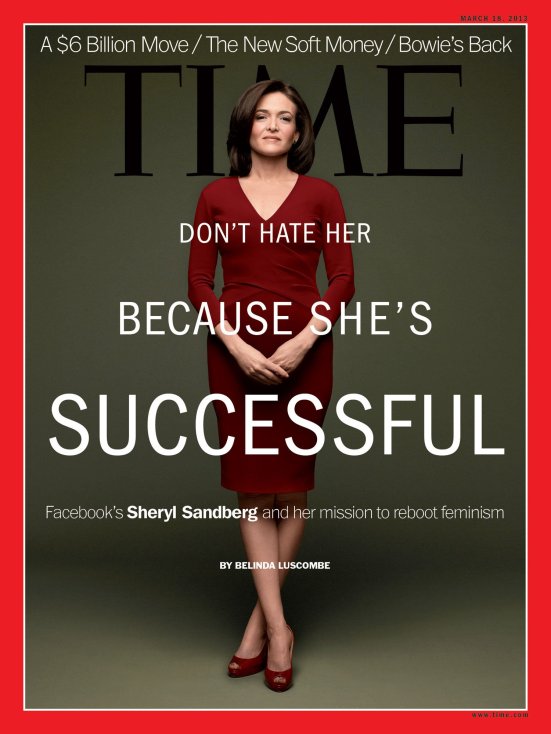 Jealousy….arrogance, insecurity, AND demeaning cutesy leadership books related to gender, that’s why. As a gender, women struggle with confidence at an early age and because of that end up feeling jealous because of our own inadequacies. I’m sorry you’re not able to do what I do, but that’s not my fault and it’s certainly no reason to sabotage me.

Be in our army!

One of my favorite quotes is from Madeline Albright at a women’s conference, she lamented “there’s a special place in hell for women who don’t help other women.” I’m certain I’ll be in hell having a party with my band of Bitches. Those women who weren’t supportive of us will be the ones whose asses we’re kicking (they will still outlive the rest of the men who thought we could not do it).

Watch your back – while we won’t be the ones in tiaras wearing glitter and designer heels, we will be the ones changing the world with strategy, education, and empathy, making you even more jealous. So what if we are also not ugly?!  I’m going to keep getting stuff done and try to change the world for all the Bitches-to-be. There aren’t enough of us and we keep getting beat down. Most importantly, support and help your fellow Bitches.

Stay strong Bitches.  We are special. Let me know where you find a set of women’s golf clubs that are in a glorious gender neutral shade.

6 thoughts on “Wanted: Women’s Golf Clubs In A Gender-Neutral Shade”