Approximately one year ago, on June 13, 2012, Representative Lisa Brown (D-Bloomfield) uttered the word that runs ice through the veins and casts fear into the hearts of male elected officials: Vagina. This word, so offensive that Representative Mike Callton (R-Nashville) would not address the word itself when interviewed “I don’t even want to say it in front of women. I would not say that in mixed company.” That word, sent Representative Brown back to the “kids’ table” imposed silence on her, violating her First Amendment right to free speech and created a ripple effect which resonated throughout the world as a mantra or synonym for women’s rights and political equality. Later, Majority Floor Leader Jim Stamas, R-Midland, determined Brown’s comments “violated the decorum of the House”, said Ari Adler, spokesman for the Republican majority. 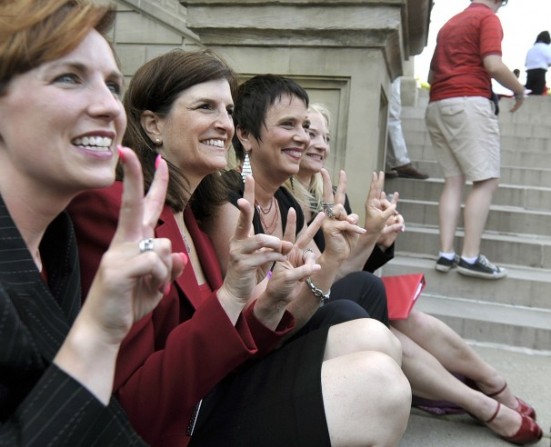 Following the *audacity* that Rep. Brown used a biological, anatomical, even “medical” [gasp!] term during her impassioned speech that discussed the implications of a  reproductive bill seeking to put new regulations on abortion providers and ban abortions after the 20 week pregnant mark, Representative Barb Byrum (D-Onondaga) was also sent back to the Kids’ Table for her “temper tantrum” when she “caused a disturbance” on the House floor when she wasn’t allowed to introduce an amendment to the abortion regulations bill banning men from getting a vasectomy unless the sterilization procedure was necessary to save a man’s life. These two instances, which were both met with penalties of barred speech and removal from previous committee assignments for “reassignment” would serve to spark awareness for the contemporary “war on women” where in the Michigan legislature less than 20% of seats [2012] are occupied by women. This is the first time in memory that lawmakers have been formally barred from participating in floor debates via the power structure in place.

Strangely, this blog is not to discuss “Vaginagate” so much as it is to illustrate a trend in contemporary leadership in regard to politics and that is prohibiting elected officials from serving in their area of expertise, or at all, due to perceived and exercised power. Power is a difficult concept to study but if you are tracking outcomes, it becomes a little bit easier as James Battista (2011) states in his paper Formal and Perceived Leadership Power in U.S. State Legislatures:

Power in general has been notoriously difficult to pin down at even a conceptual level. One candidate definition is that the power of a legislative leader or party is an ability to achieve outcomes that would otherwise have been unattainable or to prevent outcomes that otherwise would have taken place (Bachrach and Baratz 1963). The essential problem with this measure of power is that it requires access to the counterfactual timelines in which the leaders or parties either did not exist or were powerless. Instead, scholars writing about both the U.S. House and state legislatures have primarily used two kinds of proxies to attack the question of leadership power: power as seen in the rules and power as seen by the legislators (p. 103).

How power can be utilized as a stalemate or “punishment” reads like a list ripped from an old high school year book or a future Mean Girls script. It shows itself via legislative situations in status, gerrymandering, recalls, banning, dissolving committees, reassignment to less powerful committees or those without activity, not allowing for hearings, changing language of bills, and the list goes on and on.

Power as allowed via the rules as Battiste reports:

Among the state legislatures, however, the often-sweeping powers granted in the rules may represent an upper bound. For example, in thirty-six of the 49 state lower chambers, the chamber’s rules grant the speaker the authority to make all committee assignments for all legislators of every party (Clucas 2001, 326–327, 335). I would not expect, however, that all thirty-six of these state leaders are effectively able to appoint members purely at their whim or to choose a slate of committee assignments that gives them, personally, the highest utility of all possible slates. I expect instead that to some degree leaders restrain themselves to avoid reprisals from an unhappy majority caucus and that this constraint varies from chamber to chamber or year to year (p. 104).

While a 1996 study by Darcy shows that “women are not discriminated against when committee chairs are selected” (p. 892) there is suggestion that how selection occurs can pose more or less favorability in whether or not a woman gets an appointment given the lower number of women choosing to run for election of certain political offices.

Since the 1970’s there has been inconsistent at best regarding the expectations of reception of women in the role of politics. Darcy discusses in the conclusions of “Women in the state legislative power structure: committee chairs” (1996) that perhaps the actual power resides in the fact that female political leaders should forgo the male/female struggle against perceived or present stereotyping and prejudice in an effort to not “burn out” or become overcome with the battle inside of the battle. To actually succeed, the author describes that focusing instead on the political agenda and allowing males that may be attempting to save the “boys club” will eventually look like a liability to the elected position and eventually turn out of favor with his constituents.

Fast forward from this research in 1996 to “Vaginagate” in 2012 where perhaps the very beginnings of this attitude Darcy describes has caught up to our time, so succinctly wrapped up in Representative Lisa Brown’s departing speech in November, 2012 (remember she still has one more term she could serve someday down the road in the state House):

“I would be remiss if I didn’t acknowledge (Rep.) Pete Lund, (House Speaker) Jase Bolger, (Rep.) Jim Stamas, and (Rep.) John Walsh for: gerrymandering me, trying to have me recalled, banning me from speaking, and breaking your promise to have a hearing on my cyberbullying bills,” Brown said. “To those of you who think you are finally rid of me, I won’t say goodbye, just, until we meet again.”

I’m eager to know when/if she returns, if the struggle of power will be advanced enough to appreciate Representative Brown and her lady parts or if we will still have to worry about much ado about a vagina in elected offices?

Links attributed above to phrases or accounts: